[A Memoir: for my daughters] 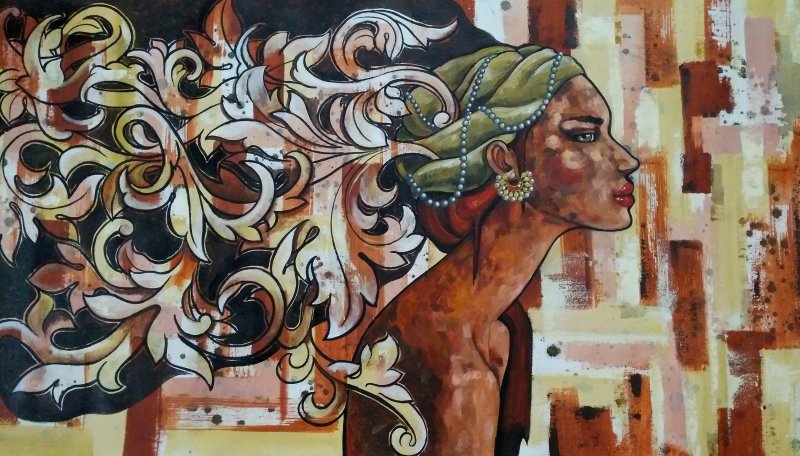 Crazy girls, listen, the topography of a fertile adult mind of a woman, turning middle-aged and forlorn, is a queer one.

Every morning, the tiny windows of your mind’s room are the spilled whole milk, the sugary beads of brown, green, yellow and pink grains of the cereals tossed and turned over and over. Every hurried morning, the household is the running, the stumbling on the overdose of white sheets scribbled in haywire pencils and crayons and the splattering of sibling talks and the milk teeth falling out, restored in zip-lock bags and hidden beneath crumpled pillows in the bed. The tooth fairy might cross the perennial river of your virgin dreams and emerge in a starry, mirthful night, you see!

The tooth fairy? Oh yeah, you crazy girls still fight over her elusive arrival, you haven’t yet trampled over the unsacred laws of truth. Once the marks of truth are carved, the laxmanrekha, the boundary line is clear, defined.

Every evening the orchestra of your piano and your violin lessons are the undulations amplified by the medley of Indian movies and songs. They spill over the rooms where your duals, your fights, your ecstasy pushes the boundaries of our haunting ballads of loneliness. Every night, you both step into your pajamas and do the nightly ritual of brushing your adult teeth that have grown recently, and finally in the bed, you fish for that zip-lock bag carrying the minuscule milk teeth. My girls, month after month, the topography of your mind consists of the connecting dots of flowers that have bloomed, fairies whom you are on the verge of bidding adieu, whispers that are still moist and fragrant but will soon turn into adolescent talks and the unfailing urge of letting go. It consists of the beginning of a blow here, an arch of understanding there.

“You know what is the biggest state in USA?” The nine-year-old questions me.

“I know, it is California! We’ve been there twice…” pat comes the reply from her seven-year-old sister.

“No, it is the state of Alaska, with the biggest coastline!” The nine-year-old is quick to rectify.

“So where does the coastline end? Are you sure it stretches way more than the beaches we have been in California?” The younger one, starry-eyed and always brimming with excitement, quizzes her.

The curious minds are quick to take in all the concoctions of the beach tales they have been part of since they were two years old, in the states of California, Florida, Texas, among others. Their quizzing meanders into many unforeseen directions, from the discovery of Galileo to the revelation of Australia in the southern hemisphere, starting to have the fall season when we are transitioning from the spring to our long summer days. A map of the world in their upstairs bedroom hangs on the wall indolently, slanted on one side, crumpling on the other side, and they often get carried away by the complex, layered topography of the map, striving to unravel their little bits and pieces positioned somewhere within that mammoth universe.

“We talked about the Himalayas of India in school today, Mommy. The mountain range, and the flora and fauna there.” The nine-year-old reveals during bedtime.

“Oh yes, we talked about it in our class too!” The seven-year-old exclaims, and then adds, “But no, I forgot what I learned.” She says “I forgot” a lot of times all through the day, as her favorite refrain that washes past her shore.

“Now, now, off to sleep. The clock goes tick-tack-toe. It is nine already. Why still awake, silly girls? Eight hours of sleep is the minimum you need, remember?” My words of admonition mixed with a dash of indulgence are the wrinkles that grow on that canvas of simple leisure, the wrinkles that turn steady, insistent and necessary. You must learn and unlearn, and then again learn and unlearn as the days and the nights overpower you, as the topography of the mind will change at every turn. I tell you, the topography of a fertile adult mind is a queer one.

The clock goes tick-tack-toe, morning, evening and night. The clock in my own body, my own private innate being is ticking fast. Each day I crave to return to an inner landscape which I can fill with promises of lush pastures, easy, simple rules of lighting up my shores. But each night I realize it is the same surrender, the helter-skelter sounds of a multi-colored heart coming to jolt me out of my adult reveries. The criss-cross of a number of thwarted wants resurface, some on their own, some at my unconscious whims. 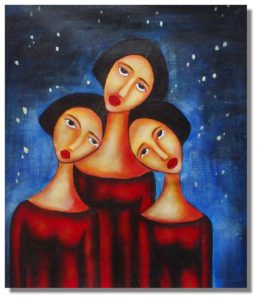 At age forty, when all a woman needs are mammograms and annual wellness checks for her reproductive tract that is still technically functioning, she is not supposed to go back and reverse the topography of the mind.  A lot of it has been etched in crooked, cursive lines and the marks can’t be erased. At age forty, a woman’s body and mind, hopscotching between the soil of her faraway hometown and the manicured grass of the backyards and front yards of her adopted homes is like that July full of rain and darkness which does not know where the deluge might pour, rising out of the hollows of a sky aged with memories and footnotes. Thus, the deluge is all over the place, clinging to her with a measure of awkwardness. 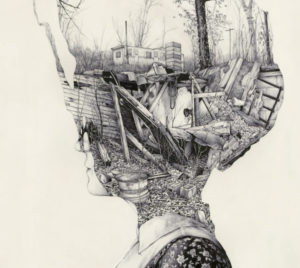 An early shower of puberty followed by a brash series of lessons and sudden bursts of pain were all mine. The topography of my mind has been the flim-flam of everything said, every travail and escapade I made in two different continents, the nervous childhood energy and the hot, hurried dance steps, now lost.

“Just as you are watching the film ‘Mirror Mirror’, the fairy tale of Snow White and her wicked Stepmom with hungry eyes, I read the original story with a hungry mind when I was your age.” I tell the daughters one day, as the giant television screen glimmers with the opaque beauty of Snow White and the shrewd, lurid light of Julia Roberts, the stepmom. The fairy tales were a staple in a hardcover book form in their lives too, till a couple of years back.

“And you told us you once acted as one of the seven dwarfs in a play in school.” The seven-year-old never leaves any stone unturned to articulate things that she remembers, when her memories are triggered.

“Which dwarf had you played?” The nine-year-old asked. “Umm…let me think…I think snoozy.” I replied.

“Maybe you sneezed or snored a lot then, that’s why you played his part.” She said, laughing.

“But why a dwarf, mommy? Were you that short in school?” Her sister asked.

“We all were short back then, small girls growing bit by bit, year after year. Each year our lives appeared the same, but each year there were changes. Small changes, yes, but those changes made me what I am today.” I said.

“And today you are growing old. In ten years, you will grow much older.” The seven-year-old replies, giggling. “In ten more years, I will grow a lot, lot older. Then you will have to take care of mommy.” I tell her, and then she giggles some more.

Kafka, in his novel ‘Metamorphosis’, has depicted how bodies have changed. I read the part I of the book over and over, particularly fascinated by the minute, little particulars of Gregor Samsa’s life once he changes in form and stature from the plain human to the grotesque giant insect and how his mother, his sister and his boss, later his father are eventually impacted by his transformation. The book which had once irked me for its queer details of the human-turned-insect narrative and which I tried hard to get rid from my brain because the suffering and the impending doom of Samsa was too hard to bear, sits tight in my senses now.

Just like Samsa, bearing the burden of his rigorous day job and his sudden transformation leaving him at the disposal of his apathetic surroundings, we saunter amid the daily rigmarole of a world. A crooked and insistent world where we bear the burden of our changed wants, as time whizzes by, altering the fabric of our bodies, the topography of our minds.

From our past to the ubiquitous present stretching towards the unforeseen future, we all begin to live with the uninvited taunt of one alteration, one transition to the next, and then this co-existence becomes bearable. By and by, its sits with us like our second skin. Gregor Samsa is all that brews within me, from succumbing to retreating to being injured to collapsing, to the final closure. Gregor Samsa and his battered body curled up within the insect is the blow to the dizzying freedom, the blow to the opening up and the crushed text that I might become, as I strive hard to find my messed-up topography in the mammoth universe laid out in the huge wall-to-wall map of your bedroom, my girls.

From the womb of flesh and blood to the ratting loud of school buses and campgrounds.

From the unsettled scores of silly girlhood to a fake wave of gaiety rippling across rooms that turn to halls, then to long labyrinthine corridors, then to an unknown mist of unfamiliar streets.

From the sanitary pad that held my first virgin blood of menstruation to the ripped nightwear I shed off today, the musk of a woman nestling overgrown cities within her folds.

From the rubbles of an earth that have died within me, with each tight slap on my innocence, with each death of a dear and loved one, with each leap I have taken from surrendering myself to pulling myself away.

From the paper boats of my child days floating in muddy puddles to the dense clouds floating in the ashen skies above a new home where I have been moored now, a newbie for the umpteenth time.

From your tooth fairy tale and your quizzes to the loss of my own childhood dreams, from the scattered notes of my forgotten textbooks to the solitary, makeshift haven of my dissent and writing, I roam hither and thither, taking in your foamy talks. 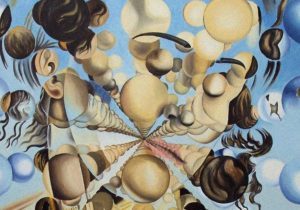 I hope you will believe some day that the topography of a fertile adult mind of a middle-aged woman is a queer one. The mind of your mother, who is full of you both and her cracked earth and the overwhelming mass of her stories. 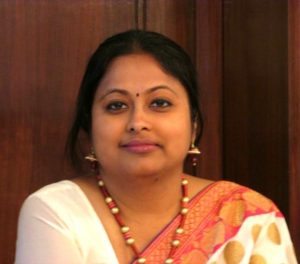 Lopamudra Banerjee is an author, poet, editor and translator based in Dallas, Texas, USA. Her memoir ‘Thwarted Escape: An Immigrant’s Wayward Journey’ and her debut poetry collection ‘Let The Night Sing’ have received honorary mentions in The Los Angeles Book Festival and New England Book Festival 2017 respectively. Her memoir ‘Thwarted Escape’ was also a First Place Category Winner at Chanticleer Reviews and Media LLC, USA. She also received The International Reuel Prize for Poetry in 2017 and The International Reuel Prize for Translation in 2016 (for ‘The Broken Home’, her English translation of Nobel Laureate Rabindranath Tagore’s novella ‘Nastanirh’). ‘The Broken Home and Other Stories, her translation of two novellas and six short stories of Tagore is now a book in paperback version, published by Authorspress. She has also co-edited two fiction anthologies, ‘Defiant Dreams: Tales of Everyday Divas’ (with Rhiti Bose) and ‘Darkness There But Something More’ (with Dr. Santosh Bakaya) and also co-edited a poetry anthology of women poets along with Dr. Santosh Bakaya, ‘Cloudburst: The Womanly Deluge’.

One thought on “A Mother’s Account: “The Topography Of The Mind””