That autumn eve by the tranquil brook,
when the leaves got disembodied from their woody perennial match; met two strangers beneath a devastated thatch.

Scarred and agonized were their bodies and Soul.
Strenuously fidgeting to cast aside their inner storms. Agitated by the unanticipated predicaments.

“Enough”, they spoke in unison.
Charisma owned that moment.

Ensuingly, their emotions and words poured
heavier than the monsoon rains, ever could.
Downpour of emotions suddenly
Devoured on the remorse and perturbation
That prevailed in the overwhelmed arena of their hearts.

“Never have I ever, felt this before!”, —- they exclaimed.
Embracing each other they witnessed
The dusk growing darker. That hug was more comforting than the fire on a freezing Winter night.
To add to the glory and grace of the moment
Sang a Nightingale in the moonlight with utter delight.

Such comfort and empathy ignited
Between the strangers.
That was their Hour of Love.
That Autumn night felt felicitous for being showered upon with the Rosy stroke of serendipity!

Thence, embarked this saga of Love.
Two strangers drenched their thirsty souls.
Conviviality of the night culminated in a life long wedded bliss.

Decisively, when one nightfall promised
No dawn for the next day.
Their Corpses rested together in the boneyard
And Their Souls; Coupled Forever! 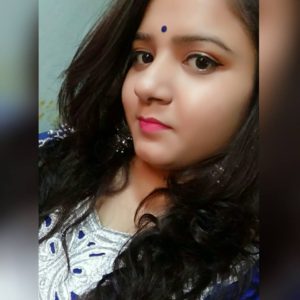 Surabhi Kashyap
Born in Dhanbad (Jharkhand) and completed her schooling from Carmel School, Digwadih; Surabhi is a Logophile and loves expressing her heart through her writings. Presently, she is pursuing her Graduation in English from VBU. She usually writes poems and articles. Her first published poem was “No gun, No knife!”

40 thoughts on “Poem: THE LOVE BETWEEN TWO STRANGERS by Surabhi Kashyap”