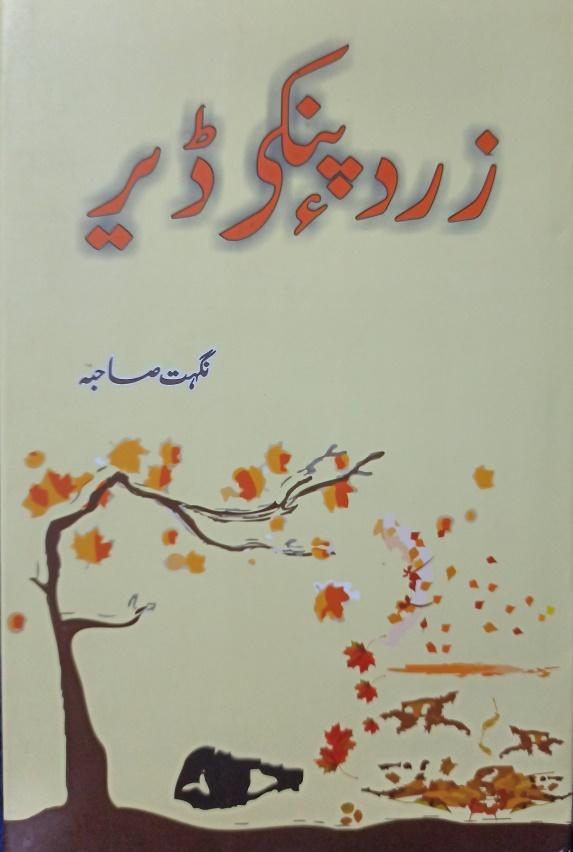 Reading a collection of poems (of any poet) is never just a sojourn through a poet’s mind alone, but it is a whirlwind tour of the politico-socio-cultural happenings through which a poet is living or has lived. The perspective brought forth under similar circumstances differs from person to person. Despite sharing a common space, we can say there are as many universes as human beings are. In my opinion, a collection of poems of any poet in that perspective carries a universe in itself. It becomes secondary then to draw its parallels with others. For one that universe may be self-sustaining and enriching in all what ought to make it adorable and for others very fragile; to stand without pointing out any reason. So without any exaggeration, we can say, like other fellow beings, poets are unparalleled creators of their own universes

Prying into Nighat Sahiba- Zard Paneki Dair is a ceaseless endeavour that brings before the eyes of a reader an image of her untainted thoughts, her feelings, her impulses and her reactions; her life size portrait to guard her own universe in her own way.

Zard Paneki Dair is a debut poetry collection of Nighat Sahiba, it comprises 47 Ghazals and 32 blank and free verse poems. It is a unique collection for there are almost as many themes as there are poems.

Be it through formal or informal way of education, she strongly advocates against the system of indoctrination by virtue of which people visualize the world of perfection-an ideal setting of people to people interactions or people interacting with things around must produce the ideal results. The generation brought up being moulded and patterned to fit into the narrow and particular needs of the particular society cannot appreciate the things as they exist in nature. They don’t have their own opinion for they are indoctrinated rather trained since their childhood to look outside themselves for their opinions, to accept and adapt themselves to a clutch of authority figures.  They measure their own opinions to that with ‘received opinions’.

Ambiguity in poetry serves an important purpose of leading deeper meaning to it; thereby lengthening the spectrum for the readers to use their imaginations to explore multitude of meanings. There are ample examples of both structural and lexical ambiguities in the collection. The last poem “Foreword” in particular is the climax of the lexical ambiguity. The poem is divided into ten parts, an utmost attempt to describe what a poem should and should not look like by comparing it to school going child, a friend, pile of pallid leaves of autumn, a curry, a library, a beautician, a daughter, a mother, a brook coming down of mountain and the life itself. But at the same time the poem talks about different socio-cultural aspects of the society. She writes,

In a time when political mayhem in this part of the world [Kashmir] has turned almost every human being skeptical about anything good, poetry helps us to fill our hearts with hope. It liberates us from the clutches of despair and infuses the strength to stand firm amidst the chaos and at the same time motivates us to move on. It empowers us and in return demands nothing. The poet believes in hope and considers it as innate characteristics of humans. Despite being the citizen of voiceless community, she repeatedly cajoles her soul to stay steadfast and hopeful regardless of obstacles. She talks about the dreams quite often and dreamers believe the most in the harvest of hope.

While being utmost hopeful, her poetry accepts the presence of socio-politico-cultural and religious constraints on freedom of expression on one hand, and on the other encourages to speak- speak up against injustice be it institutional or individual as being silent means to be an accomplice of injustice. The poet believes celebration of silence in a society as virtue is to raise the generation who in reality don’t exist for they approve every crime and injustice.

The poet is socially very conscious; she talks about the brain drain in her poetry. No doubt better standard of living and quality life, higher salaries, access to advanced technology and more stable political condition lure them to migrate but her concern towards her motherland is evident, she says

‘Poetry is music set to words’, writes  Dennis O’ Driscoll. Of course, music that set the restless strings of a soul to a soulful journey. A journey to discover the intricacies of life aspects that rarely finds the place in our routine communication. But at the same, for those who seem to have been lost in the moors of silence it rejuvenates the passion to strive and live. This is what one feels while reading journeying through the Zard Paneki Dair. One feels one’s silenced emotions and choked feelings are voiced.

Primarily, Ghazal is an expressive poem aimed to inspire readers through poignant themes and subtle language with the help of a variety of literary devices and figures of speech. The Ghazal do follow a particular meter but the command over the language and genre in Zard Paneki Dair can be gauged by her lucid word play, metaphors, symbols and imagery. She has written Ghazals in 13 behers (meters) in the collection. It is not all that she knows about the Ghazal, she has done an experiment with this genre by fixing the independents words in a couplet, as the beads of a rosary, to tie them through some relation. As per my research in Kashmiri literature in particular the Ghazal; there isn’t any example of such experiment up to 2016. The credit to introduce such tradition in Kashmiri Ghazal goes to her without any doubt.

Most of the poets from Kashmir (especially born in and after the eighties) paint the portrait of wailing Kashmir in their poetic canvas the way they have seen it, felt it and imagine it in their dreams. They feel their imagination has been restricted, their dignity has been jeopardized, their voice has been choked, their feelings have been stabbed and their dreams have been chopped. All these sub-human feelings, Kashmiris lull in their unconsoled bosoms are painted here and there in bits and pieces in different couplets of Ghazals.

Zard Paneki Dair stands for freedom the patriarchal system has denied, the journey of endless misery women experiences, the ‘document of evidence’ in the massacre of individuality and identity of women. Apart from Ghazals there are some very bold poems to highlight how the character of a women is still caught in the murky waters of suffocating air in phallocentric system among which ‘Aqlema’, ‘Pachhan’, ‘Banjar’, ‘Jannat Tal Paden’, ‘Yiny Me Brem Dikh’, ‘Ba’e Ches Habba Khatoon’, ‘Partcheni’, and ‘Khawab te Tuhi’ are prominent.

Poetry is language at its most distilled and most powerful, says Rita Dove, an American poet. Without any exaggeration, unlike most of the Kashmiri poets, the poetry of Nighat Sahiba qualifies as being most distilled and most powerful. Full of metaphors and indelible imagery along with unparalleled usage of diction chalks out her poetic character to a far advanced level among her contemporaries.

Here is an example:

Offering such a wonderful book to the lovers of literature, Nighat Sahiba has accrued extra responsibility on her shoulders- onus that comes with myriad challenges. Her merit as a new and clarion voice in the ambience of Kashmiri literature shall be gauged by her works that will follow this debut book. Since she has set a new benchmark and earned laurels, she need not to sit on the laurels. The answer to this concern solely lies in the lap of the future, and how she improves upon to set her standards intact and alive.

Summing it up, there are many poets who follow their predecessors to let their imaginations unchained within the boundaries and only a few who, without caring about the set path, chose the contours themselves to let their mad hearts free to dance the way they feel. Zard Paneki Dair takes Nighat Sahiba out from the former category and secures for her a well deserving space in the latter.

A Review by Perveiz Ali